Milton Tri/Du is this Weekend!

So... who's racing at Milton this weekend?

It's shaping up to be a nice day so hopefully the warmer weather this week will have warmed up the water at Kelso and people won't be blue when they come out ;)

I have never done this race for one very simple reason:  I am afraid of heights.  Yep.  I said it.  The Sixth Line hill is something that makes my stomach drop... I have ridden down it - once... feathering my brakes all the way (not as bad as riding 9km downhill into Keane from Lake Placid but... pretty scary for me all the same).  I have never attempted to ride UP that hill.  Somehow I don't think I could... although without trying, I guess I'll never know... LOL!

I admire anyone who likes to race this event because of the above mentioned hill.  I am amazed to see racers come FLYING down that hill, with a sharp left turn at the end... and my breath tends to whoosh out as I hope for them that they don't hit gravel or sand or... otherwise crash at that turn.  I'm a spaz, you see... I take that left turn at the bottom like a little old lady from Pasadena ;)

I really hope that everyone who is racing this weekend has a fabulous experience and if you flat and need a tire change - may it be swift :)

I plan to be up there on Sunday morning, giant zoom lens in hand... snapping pics of the athletes.  I'll be wearing Sugoi Brand Champion gear and I'm about 4'10"... so if you see a tiny girl in red/black/silver with a big camera... say HI!!

Some of you may remember that my friend introduced me to trail running last fall and I fell in love with it.

This past weekend, my friend Tina (AKA The Trail Queen, AKA Pigpen) ran her first 100 mile race (160km!!) at Sulphur Springs, ON.

Never having attended a trail race of any distance - much less witnessing those who have traversed more distance on foot than I can on my bicycle... I was intrigued to say the least.

I'd been hearing about the training plan for this race for some time and couldn't quite fathom how running 80km in training would translate to being able to run 160km on race day.

Tina and the rest of her fellow long-distance runners left the start line at 6am on Saturday morning and had until noon on Sunday to finish their 100 miles.  30 hours.  I repeat ... 30 hours.  When was the last time you or I did anything for 30 hours without sleeping in between??

I thought about going out on the Saturday with my camera but didn't think I'd be able to see all that much - the runners were doing 20km loops and I wasn't sure how spectator friendly the course would be (considering they were in the forest...).  I was kept updated at regular intervals by other friends who were at the site and so I was well-prepared to be able to arrive on time to see Tina cross the finish line on Sunday morning.

It rained.  A lot.  I hate having wet feet at the best of times (unless I'm barefoot) and I cannot imagine staying outside for hours on end with wet and soggy shoes, socks and feet... not to mention some of these people would be out in the elements for 30 hours - these people are hardcore!

Friends had set up a big tent with a sign that read "Team Tina" - just near the finish line. Some had been there all of the preceding day and night... making sure Tina was okay on the trails.

I got to the finish line at 10am (with a large chocolate cake in hand - it's Tina's fave) and waited eagerly to see the last runners coming in.  It was a much different sight than an Ironman finish - the finish line chute (it was a path made of cones) itself was not huge - in fact, I didn't see it right away.  There were about 10-20 people milling about, waiting for their friends and family to finish their event.  No tables of food or drinks or volunteers in brightly coloured shirts by the finish line... no crowds of people yelling and screaming... no music... no announcer on a bullhorn or PA system... just a quiet day in a conservation area with the sound of birdsong.  It was really peaceful.

I saw a man finish, his lower body covered in mud, and then sit down immediately and have a beer with his wife.  Then about 20 minutes later, a woman finished, wearing a sunny, flowered running dress with her legs covered in mud... after which she took off her shoes and walked around with plastic grocery bags on her feet :)   After a little while, we saw Tina coming up the hill - arms raised in the air in victory - huge smile on her face!  She was accompanied by another friend, who had been pacing her for the last lap.  We all screamed and cheered her on as she crossed the finish line and then she was presented with her belt buckle by the race director and we took some photos.  Hundred mile races give out commemorative belt buckles to finishers instead of medals, in case you weren't aware... pretty cool!

A M A Z I N G
I cannot imagine what would go through your mind, on a trail for over 28 hours... sun, rain, mud... and knowing how much distance you still have to travel to get to the end... heck, I can't even stay up past 9pm without getting cranky...

Tina, you are amazing!  You are an inspiration!  You're a kook and that's why I love you ;)


Congratulations on doing something that most of us would not dream of doing!
YOU ROCK!!!
I hope that Tina reads this when she wakes up... sometime on Tuesday ;) 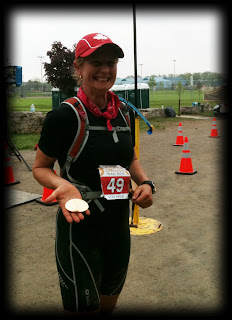 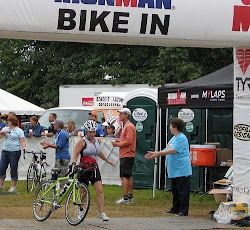 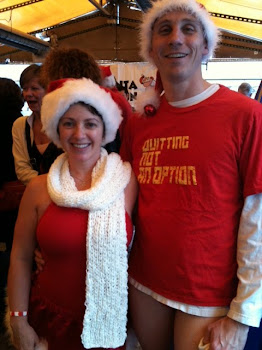 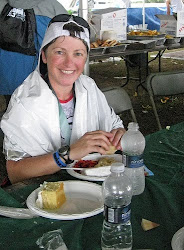 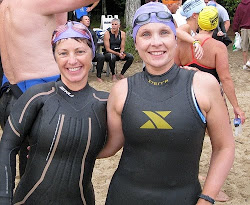 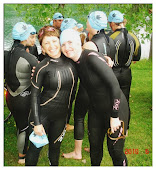 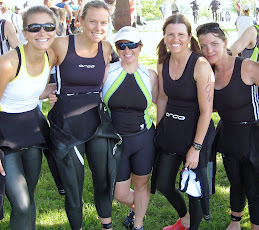